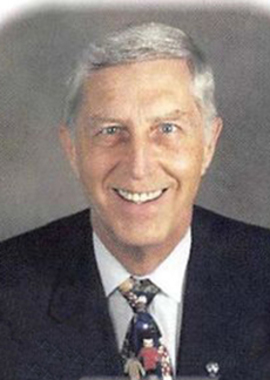 Back to William's story

William Earl "Bill" Crump III, 81, born in Wynnewood, Oklahoma, slid into heaven on December 3, 2019, in San Antonio, Texas. He was the son of William Earl Crump Jr. and Elizabeth Curtis Crump.
He was preceded in death by his twin brother, Benjamin Crump, and sister, Tamsy Freeman.
Bill is survived by his loving wife of 50 years, Jane Hallman Crump of San Antonio; his son, William Earl Crump IV of Wichita, Kansas and wife Vicki and their children Hunter, Kylee, Marlee, Hudson, and Camden; daughter, Heather Martin of San Antonio and her children Kirby and Nolan; son, Jed Crump of Austin and wife Krista and their children Bella and Gabby; daughter, Tamsy Smith of Stonington, Connecticut and her children Wiley, Ethan and Dean; and his faithful chocolate lab, Reese.
After attending San Antonio Academy, Bill graduated from Wynnewood High School in Wynnewood, Oklahoma.
Bill attended Texas A&M University prior to enlisting with the U.S. Army and was a veteran of the Vietnam War. He received a Purple Heart, among other recognitions.
In addition to enjoying time with his wife, children and grandchildren, he was an avid outdoorsman and enjoyed hunting and fishing, including multiple trips with friends to Argentina and South Dakota and his favorite ranches all over Texas.
He also loved traveling the world with Jane and their many close friends. He loved shooting skeet, collecting guns and was known for passing on his extensive knowledge of this with many of his friends and eventually their children and grandchildren.
He was a member of the Olmos Kiwanis Club and San Antonio-Bexar Kiwanis Club for 43 years total, with 39 years of perfect attendance and proudly wore his Kiwanis lapel pin daily. He served as both governor and lieutenant governor of the Texas-Oklahoma District, served on multiple Kiwanis International committees, and served as both a Distinguished Club President and Distinguished Club Secretary of his local clubs.
He served on the board of directors of the San Antonio club for 12 years, was a board member of the Texas-Oklahoma Kiwanis Foundation, a life member and board member of the Lt. Governors Association and was a both a George F. Hixon Fellow and a Walter Zeller Fellow.
While serving as governor, under his leadership, the Texas-Oklahoma District raised the funds to purchase a disaster relief canteen truck, which has served thousands of people affected by disasters.
He was a member of The Governors Club, an honorary member of the Former Texas Rangers Foundation, a member of the San Antonio Petroleum Club and a member of the San Antonio Gun Club where he once served as President.
Bill will have the honor of being remembered at the April 21, 2020 Aggie Muster on the campus of Texas A&M University when his grandson, Kirby Martin, Class of 2023, answers for him in the Call of the Absent.
A memorial service with military honors is at 1 p.m. Monday, December 16, 2019 at Alamo Heights United Methodist Church, 825 E. Basse Road. Reverend Donna Strieb will officiate.
In lieu of flowers, memorial contributions may be made to the Bill and Jane Crump Scholarship Fund with the Texas-Oklahoma Kiwanis Foundation or any charity of choice.
Published on December 11, 2019
To plant a tree in memory of William Crump, please visit Tribute Store.

Plant a tree in memory
of William

A place to share condolences and memories.
The guestbook expires on March 10, 2020.