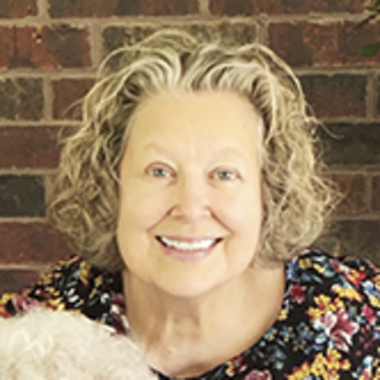 Back to Peggy's story

PAULS VALLEY PANTHERS LOST THEIR BIGGEST FAN!
She was a loyal Pauls Valley Panther fan even though she had been a Wynnewood Savage cheerleader.
Peggy Jean Perry of Pauls Valley passed away December 22, 2019 in Norman, Oklahoma at the age of 68 years.
Peggy Jean Blankenship was born October 3, 1951 in Wynnewood, Oklahoma to Ralph and Beatrice (Hicks) Blankenship. She graduated from Wynnewood High School in 1969. The Pauls Valley area has been her home most of her life.
She and Ronnie Perry were married in Wynnewood, Oklahoma on January 3, 1971.
Peggy furthered her education by attending the Oklahoma School of Banking and Business. Peggy returned to Pauls Valley and worked at the Pauls Valley National Bank, Valley Blossom Shop and in the Pauls Valley School System for 39 years beginning at Jefferson Elementary School and later at the Lee Elementary School where she worked until her retirement. After retirement she continued to enjoy subbing in classes and the office at the high school.
Peggy was an active member of the First Baptist Church of Pauls Valley. Among her many church activities, she was especially active in the church choir. She loved being part of The Singing Churchwomen of Oklahoma even though it was for a short time.
Peggy was preceded in death by one son, Rodney Neal Perry.
Surviving family include her husband of over 48 years, Ronnie Perry of the home; their children - Stacee Dingler and her husband Robbie of Norman, and Greg Perry and his wife Shawna of Pauls Valley; four grandchildren - Mollee Dingler, Matthew Perry, Jared Perry, and Tanner Perry; her parents, Ralph and Beatrice Blankenship of Wynnewood; one sister, Dianna Cunnius and her husband Ed of Wagoner; three brothers - Ronnie Blankenship, Richard Blankenship and his wife Mickie, and Jimmy Blankenship and his wife Carla, all of Wynnewood; as well as a host of nieces and nephews, including a special niece, Kim Tyler of Norman.
Funeral services will be held Thursday, December 26, 2019 at 2 p.m. at First Baptist Church of Pauls Valley, officiated by Pastor Bryan Trant and Dr. Joe Elam.
Interment will be at Mt. Olivet Cemetery under the direction of Stufflebean-Coffey Funeral Home.
We invite you to send a message of condolence and view the family's guestbook at www.stufflebeanfuneralhome.com.
Published on December 23, 2019
To plant a tree in memory of Peggy Jean Perry, please visit Tribute Store.

Plant a tree in memory
of Peggy

A place to share condolences and memories.
The guestbook expires on March 22, 2020.

Ronnie and family, I am so sorry to learn of Peggy’s passing. My prayers and thoughts are with all of you. May your fond memories of joyful times together sustain and comfort each one of you.

Julia Johnson Wood
I am so sadden to hear of the passing of Peggy. I was the counselor at Jefferson for a couple of years in the late 70s. I always loved Peggy and her sense of humor. Prayers for peace for her family.
Meave Family

Written in the Stars was purchased for the family of Peggy Jean Perry by Meave Family.  Send flowers

Roses and Moonlight Bouquet was purchased for the family of Peggy Jean Perry by Love & Prayers, Carrie Campbell-Bishop.  Send flowers