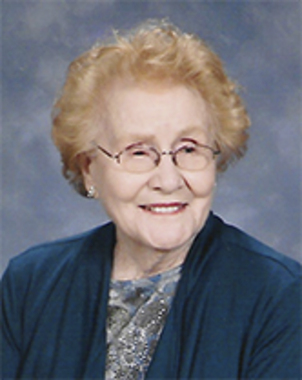 Back to Lola's story

Lola Mayme Henson Dennis, 100, was born May 22, 1919, five miles northeast of Pauls Valley, Oklahoma, and entered eternity with Jesus Christ on January 29, 2020. She was the oldest daughter of nine children born to John Henson and Hersey Phillips Henson.
She attended school at Higgins Chapel and graduated from Rosedale High School, where she lettered in softball and basketball.
On July 13, 1940, Lola married James Dennis at the First Baptist Church parsonage in Pauls Valley, Okla. They raised three boys - Gary Allen, Danny Lynn, and James Dwight - in the Maysville area. They later moved to Elmore City, Okla., where, when Lola was 45 years old and a grandmother of three, she and James had a daughter, Dayna Beth.
Lola accepted Jesus as her Lord and Savior at the Unity Missionary Baptist Church north of Maysville when she was in her early 20s. As her Christian walk grew, Lola taught Sunday School and Vacation Bible School, attended Women's Missionary Union, and served as church clerk at the First Baptist Church of Elmore City, where she was a member for more than 40 years.
Throughout her life, Lola was active in the Extension Homemakers Group, where she served in all offices and enjoyed many bus tours with her club friends. She always looked forward to the county fair and the flower and vegetable show, where she had many entries.
Lola was a natural caregiver who spent her adolescence during the Great Depression and the Dust Bowl, helping her mother care for the other eight children. She spent time sewing clothes for the family with flour sack fabric, as well as washing clothes, ironing, cooking, cleaning, picking cotton, and farming.
Lola spent her 20s and 30s raising and caring for her three boys, and her 40s and 50s caring for Dayna and James. After James' death in 1983, Lola always found someone to take care of. Even well into her 80s, Lola loaded up her friends - the "old people," as she called them - and drove them to their doctor's appointments, church events, and restaurants.
When she wasn't taking care of people, Lola tended to her yard and flowers, in which she took great pride.
Lola was blessed to be able to live on her own until she was 95 years old, before moving to The Willows Assisted Living Center in Pauls Valley, Okla., where she made many new friends. She later met many new friends at the Washita Valley Living Center in Pauls Valley.
Lola loved being outdoors and gardening. She also enjoyed sewing, reading, and playing dominoes. Lola loved life, people, her family, and, most importantly, Jesus. When the hospice chaplain asked her who Jesus was to her, she replied, "My everything." Recently when her son-in-law asked her if she had a good day, Lola replied, "Every day is a good day. It's what you make of it."
Lola is survived by her daughter, Dayna Chapman and her husband Darrell of Elmore City, Okla.; grandchildren Kent Dennis of Fort Worth, Texas, Brent Dennis of Henderson, Nev., Cindy Ritter and her husband Ted of Moseley, Va., Carrie McKnight and her husband Rod of Stroud, Okla., Vincent Dennis and his wife Kristen of Norman, Okla., Kelly Dennis of Abilene, Texas, Codey Dennis and his wife Donna of Stephenville, Texas, Kasey Chapman of Aurora, Colo., and Keely Howard and her husband Creede of Elmore City, Okla.; daughters-in-law Margie Dennis of Noble, Okla., Darlene Dennis of Stephenville, Texas, Tana Dennis of Blanchard, Okla., and Alice Camp of Norman, Okla.
She is also survived by one sister, Virginia Hopson of Pauls Valley, Okla.; 15 great-grandchildren; and a host of nieces, nephews, cousins, and friends.
Lola is preceded in death by her husband, James Dennis; sons Gary Dennis, Danny Dennis, and Jimmy Dennis; parents John and Hersey Henson; brothers Grady Henson, Glen Henson, JC Henson, and Leo Henson; and sisters Lois Obringer, Faye Henson, and Lillie Mae Francis.
Funeral services were scheduled for Friday, January 31 at 2 p.m. at the First Baptist Church of Elmore City, Okla., with grandson Kasey Chapman officiating. Burial was at Mount Olivet Cemetery in Pauls Valley, Okla., under the direction of Wooster Funeral Home in Elmore City.
Published on January 31, 2020
To send flowers to the family of Lola Dennis, please visit Tribute Store.

Send flowers
in memory of Lola

A place to share condolences and memories.
The guestbook expires on April 30, 2020.