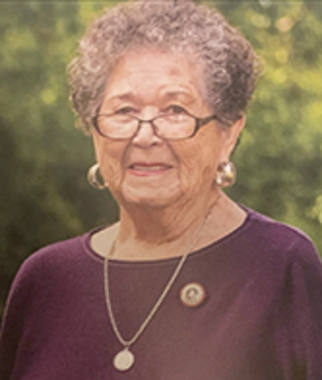 Back to Geraldine's story

Geraldine Sweetman of Wynnewood passed away December 5, 2019 in Wynnewood, Oklahoma at the age of 85 years.
Geraldine Blackwood was born October 17, 1934 in Lawton, Oklahoma to Malinda (Gibson) Blackwood and Bryant Blackwood. She was raised in Pauls Valley.
After graduation she and Eugene Sweetman were married on December 2, 1955 in Phoenix, Arizona. They moved around as the military directed since her husband had made the United State Army, now retired, his career. They were blessed with 7 children. Wynnewood has been her home since 1975.
She never met a stranger and it is said, 'you always knew where she was by the laughter around her.'
She was preceded in death by her parents, Bryant and Malinda Blackwood; 3 sisters and 2 brothers.
Geraldine is survived by her husband of over 64 years, Eugene Sweetman of the home; her children - Millenda Thomas and her husband Ed, Felix Sweetman, Bryant Sweetman, and Jimmy Sweetman, all of Washington state, Pam Sweetman of Wynnewood, Harold Sweetman of Lone Grove, and Darold Sweetman and his wife Shari of Wayne; numerous grandchildren and great-grandchildren; 1 sister, Novaline Fox and her husband Charles of Pauls Valley; as well as a host of nieces, nephews and cousins.
Funeral services will be held Tuesday, December 10, 2019 at 10 a.m. at Stufflebean-Coffey Funeral Home Chapel, officiated by Pastor Elaine Howsley.
Services for cremation are under the direction of Stufflebean-Coffey Funeral Home. We invite you to send a message of condolence and view the family's guestbook at www.stufflebeanfuneralhome.com.
Published on December 6, 2019
To plant a tree in memory of Geraldine Sweetman, please visit Tribute Store.

Plant a tree in memory
of Geraldine

A place to share condolences and memories.
The guestbook expires on March 05, 2020.

Doris Richardson
She was a good friend to me for decades. I just tried to call her and when the number didn’t work my daughter looked her up and found out she passed away. She was a lovely person and I will miss her.
Trisha Fowler Hays
We were all saddened to learn about Aunt Geraldine. She was so joyful and humorous! We loved to be around her. She always spent time with children and taught many generations to play cards, including me. Those were special times!!
She was a compassionate giving soul and loved her family and extended family... We loved her right back!
Geraldine was so proud of her Chickasaw Heritage and wore her Chickasaw pin everywhere. She will be surely missed at the Chickasaw Senior Center and all the Chickasaw Festivities, that she so enjoyed.

I will cherish the memories I have of my Aunt as she will always be remembered in our hearts. Blessings and prayers to her family!

Garden To Go Basket was purchased for the family of Geraldine Sweetman by Eric, Melissa, and Kayla Moore.  Send flowers

Beautiful in Blue was purchased for the family of Geraldine Sweetman by Tribute Store.  Send flowers

Barbara Smith
She was a very special lady who will be greatly missed. Prayers for the Family
Gloria Crabtree
Geraldine was always special. Forever smiling, laughing, she just made your day better, Loved that gal from school days on forward. She will be missed!!! Rest in Peace,
Jo Ann Larrabee
I am so sorry to hear about the loss of this wonderful person! I have been on multiple senior events with both Geraldine and Novakine. Always had an infectious laugh and a big smile. I will miss seeing her. My thoughts are with the family!
Diana Bowen
My Deepest Sympathy to your family. I am going to miss seeing her, she was such a sweet LADY, always smiling, friendly and kind. I am so thankful I got to know her ,she always brightened my day. 🙏🏻🙏🏻🙏🏻🙏🏻🙏🏻🙏🏻🙏🏻
Jadyn Flores Montgomery

I sure do love this sweet lady! She sure will be missed! Rest In Peace Geraldine.