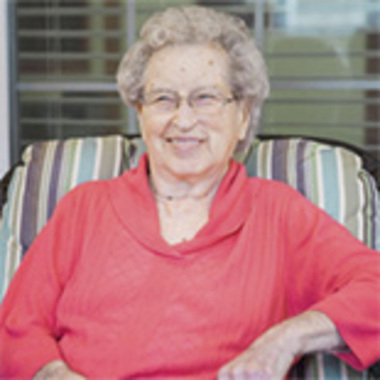 Back to Frances's story

Frances Eleanor Knight was born January 29, 1929 in Maria Elena, Chile, South America to Robert E. B. and Nellie Walker Baylor. She passed away at Brookdale Assisted Living in Ada, Oklahoma on the morning of January 7, 2017 at the age of 87 years, 11 months and 22 days.
As a small child, she lived in several different mining towns in South America and her playmates were mostly the Bolivian and Chilean Indians. Spanish became her second language and even as dementia stole her, she would break into a Spanish conversation.
Her father was a civil engineer who worked for the Anaconda Copper mines and was one of the engineers that helped design and build the Panama Canal. Frances' family was deeply rooted in Texas history from Baylor University to the Alamo to the Texas Rangers.
After high school graduation in Clarksville, Virginia, Frances and her mother relocated to the Baylor Ranch in Sierra Blanca, Texas. She worked briefly at the Hudspeth County courthouse.
One day she saw "the handsomest man she had ever seen" through her windshield at the Texaco station. She loved him from that day forward and married Delbert Knight on Valentine's Day, 1949 at the Baylor Ranch, Sierra Blanca, Texas. They lived in Fort Hancock, Texas until in the early '50s they moved to Stratford, Oklahoma where they made their home until she moved to assisted living a year ago.
She devoted her entire life to being a good wife, mother and grandmother. Her riches and accomplishments are represented in her children and grandchildren. While she didn't work outside the home after marriage, she worked side by side with Delbert to make their ranch a success. The saying goes that behind every good man, there is a strong woman...that was Frances.
There was always room at her table for one more and she fed many. She was a marvelous cook and a welcoming hostess to everyone who came. She made everyone feel special and never tired in doing that job.
She was preceded in death by her soulmate and husband, Delbert R Knight in 2005; her parents; one brother; two sons, Delbert R Knight Jr. and James Russell Knight; and many brothers- and sisters-in-law that she felt so blessed to have in her life.
She is survived by one son and daughter-in-law, Bob and Debra Knight of Stratford, Okla.; two daughters and sons-in-law: Beth and Jim Little of Lexington, Okla., and Mary and James Qualls of Stratford, Okla.
Thirteen grandchildren and spouses: Amy and Spanky Assiter and Canyon, Texas, Yancy Paul, Caleb and Ashley Paul, all from Lexington, Okla., Jamie Little of Flower Mound, Texas, Megan and Nick Schroeder of Magnolia, Texas, Travis and Brook Little of Owasso, Okla., Danette Qualls and Drs. Heath and Meghan Qualls of Weatherford, Texas, John Qualls of Stratford, Okla., Lindsey and Alec Foster of Spanaway, WA, Matthew and Shelley Knight of Stratford, Okla., Laura Knight of Ada, Okla., and Michael Knight of Irving, Texas.
Eleven great-grandchildren and spouses: Alli and Robert Kranz of Austin, Texas, Brittany and Robert Sidwell of Oklahoma City, Okla., Julia Sparks of Canyon, Texas, Smith, Sadye and Hunter Paul of Lexington, Okla., Audrey, Colby and Collette Little of Owasso, Okla., Tyson Qualls of Weatherford, Texas, and Amelia Foster of Spanaway, WA.
One sister-in-law, Velva Ann Bivins, and a brother-in-law, Bernard Sharp, both of Shawnee, Okla., as well as many nieces and nephews that she loved so dearly.
Services were held at the Dearman Pickard Funeral Home in Stratford at 11 a.m. Tuesday, January 10, 2017. Interment followed at McGee Cemetery.
Should you desire, in lieu of flowers, donations may be made to OMRF - Oklahoma Medical Research Foundation, 825 Northeast 13th Street, Oklahoma City, OK 73104.
Published on January 10, 2017
To plant a tree in memory of Frances Eleanor Knight, please visit Tribute Store.

Plant a tree in memory
of Frances

A place to share condolences and memories.
The guestbook expires on April 10, 2017.

Restore this Guestbook to share a memory or message of condolence of your own.