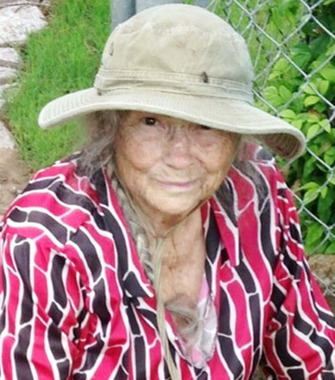 Back to Audrey's story

Audrey Ellis, a resident of Wynnewood, was born November 23, 1924 to Oliver Bee Huffines and Ruth Ola Benthol Huffines near Joy, Oklahoma. She died on September 11, 2016 at her home at the age of 91.
Audrey lived throughout central and southern Oklahoma during her childhood and teenage years, before meeting the love of her life, James Clifford Ellis, near Wynnewood. The couple were wed there on April 8, 1940 and remained together until his death in 1972.
The couple were blessed with four children, which eventually led to 10 grandchildren, 18 great-grandchildren and three great-great grandchildren with two more on the way at the time of her passing.
Always community minded, Audrey volunteered at the schools, was active in the local PTA and taught swimming lessons. It was during this time that she became enamored with gardening and was the youngest member inducted into the Wynnewood Garden Club. She stayed with the club, eventually becoming its oldest living member until it was disbanded in the late 1990s. She continued to garden as she re-entered the workforce in 1976 and helped to raise two of her grandchildren.
She worked for the city of Wynnewood before eventually serving as manager of the Wynnewood Housing Authority for 17 years, finally retiring in 1995.
She never retired from the hard, tedious work of gardening, however, and tended her own beautiful blossoms right up until the day of her death. She became known as Wynnewood's flower lady, ever to be found dirty, though happy, seated in a flower bed with a floppy hat tending to her latest creations.
When asked, she often said it was her way of making the world around her a little more beautiful each day. She was also generous with her greenery, enthusiastically welcoming dozens of others into the hobby and spreading cuttings and seedlings from her yard all over Wynnewood, the surrounding communities, and even points across the United States.
She was preceded in death by her parents; one brother, Orris Huffines of Oklahoma City; her husband; one daughter, Wanda Leach of Choctaw; and one granddaughter, Brandy Kile of Norman.
She is survived by her son, James Duane and wife Laury Ellis of Portland, Oregon, daughter Peggy Smith of Aloha, Oregon, daughter Vicki and husband Kenneth Leach of Gulfport, Mississippi, as well as grandchildren Kathryn Williams of Oklahoma City, Michelle and husband Stan Smith of Edmond, Sharon and husband Jim Weir of Tuttle, Scott Robertson of Gulfport, Mississippi, Michael Robertson of Mariana, Florida, Jennifer and husband Kelly Osburn of Pace, Florida, Todd Ellis of Portland, Oregon, Lisa Ellis of University Heights, Ohio and Shannon Kile of Wynnewood.
Services for Audrey are scheduled for 10 a.m. Friday, September 16, 2016 in the Wynnewood First Baptist Church under the direction of DeArman Funeral Home.
Visitation is from 5 to 7 p.m. Thursday September 15, 2016 at DeArman Funeral Home in Wynnewood, OK. Burial followed in Oaklawn Cemetery.
Published on September 13, 2016
To plant a tree in memory of Audrey Ellis, please visit Tribute Store.

Plant a tree in memory
of Audrey

A place to share condolences and memories.
The guestbook expires on December 12, 2016.

Restore this Guestbook to share a memory or message of condolence of your own.